CLICK HERE TO CONNECT ON THE CITY CENTRE PATIO PROGRAM
×

Twas the morning of Downtown Barrie’s annual Tree Lighting event, the air was brisk and thick fluffy snowflakes were dropping from the sky lending a sense of excitement to the streets below. One couldn’t help but notice the downtown shops bustling with early morning shoppers taking advantage of the wonderful Christmas specials. Activities began around 3:30pm, with horsedrawn wagon rides circling the Downtown core, an outdoor movie playing A Christmas Carol, and a face painting station set up in Memorial Square. Everywhere you looked, people had a mug of warm hot chocolate cupped in their hands to fend off the cold.

Of course, everyone was patiently waiting for the parade to kick off and for the star attraction, Santa Claus, to make his grand arrival again this year. The streets were lined with excited families all ready to take in another holiday tradition as they watched the streets come alive. Floats representing businesses and not for profit organizations made their way along the parade route. The most anticipated float carried Santa himself as he rode atop his mighty sleigh waving to everyone shouting merry Christmas in his familiar jovial voice.

The festivities did not end with the parade; Santa ushered throngs of people into Memorial Square for the annual downtown tree lighting. As the crowd counted down, the entire downtown was illuminated and you could sense the excitement as fireworks lit up the nights sky over Kempenfelt Bay. 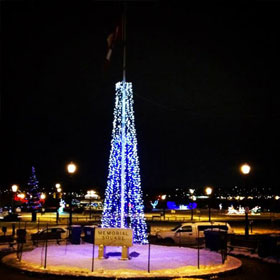 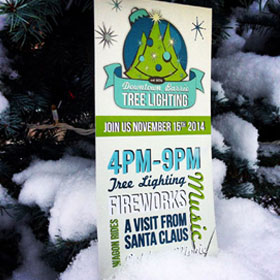 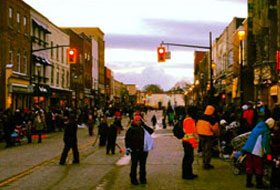 "everyone was patiently waiting for the parade to kick off and for the star attraction, Santa Claus, to make his grand arrival again this year”

Although the Tree Lighting event is only one day, Downtown Barrie is glowing with holiday activities throughout the season. It started with a window-decorating contest between the downtown businesses. This theme for this years contest was “My Favourite Holiday Story”, and there were plenty of top contenders who really stepped up to the challenge. English & Miller took a spin on the classic Charles Dickens theme with vintage and traditional décor. Grilled Cheese Social Eatery cleverly turned their window in a Charlie Brown Christmas. Flying Monkeys & The Local Foods Mart brought Downtown Barrie into Whoeville with their charming interpretations of the Dr. Seuss classic. Bell, Book & Candle opened up their windows to many of our favourite childhood holiday stories by displaying these iconic books amongst an array of evergreen needles and colourful glass balls. However, the winner of this years window decorating contest was The Edge Gallery with their incredible rendition of A Christmas Carol. 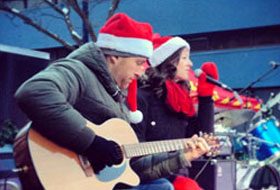 A second small event contributing to the seasonal festivities downtown Barrie this year is #FestiveFridays. This collaboration between retailers involves downtown businesses staying open later on Friday nights and offering prize opportunities to anyone who makes a purchase on one of these Festive Fridays leading up to the holidays. For more information on Festive Fridays visit the facebook page here . 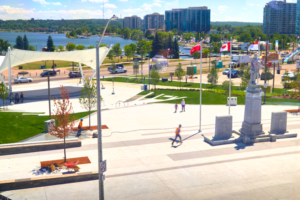 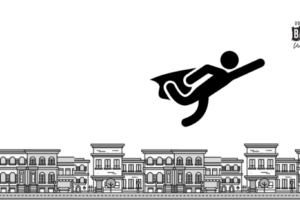